The History of White Bronze

Just what is ‘white bronze’ anyway?
Have you ever ventured into a cemetery and spied a bluish-colored headstone that was in remarkable condition, and appeared to be something other than marble, granite or sandstone? If so, chances are you found what’s called a “white bronze” marker.
White Bronze markers were very Victorian chic starting back in the late 1800’s.  The Monumental Bronze Company foundry used a formula developed by two gentlemen, M.A. Richardson and C.J. Willard, for making the markers. Made to repel moss and lichen, but also display a multitude of designs that were popular in that time period, white zinc was a hit. Made from zinc carbonate, these beautifully ornate memorials have lasted well over 100 years and counting!
How can you tell if a marker is ‘white bronze’?
The headstone will be a lovely bluish-white color, perhaps a bit darker due to weathering and climate. Any lettering will stand out as being made in a cast and put together in panels. The assured way to tell is to literally knock on the marker itself. Yes, you read correctly. Knock on it as if you were knocking on someone’s front door. If it’s a white bronze, it will have a metallic hollow sound to it. Seriously, it will. Of course you may want to look around first to see if anyone might be watching and think you’re certifiable for going around knocking on headstones.
White Bronze headstones, or ‘zinkies’ being the more affectionate term, were very popular back in the eastern part of the United States. As one would head west however, they were few and far between. Seen as a status symbol for the deceased, many families couldn’t afford such a luxury. Cost ranged anywhere from $10.00 to  $5000.00, depending on design. If attainable, there were often difficulties finding a salesman in particular states.
For example, here in Colorado, the local salesman was stationed in Denver. He would have to travel to cities by horseback, wagon or stagecoach with his catalog, take orders and return to Denver to send off a dispatch to one of the few companies making white bronze. The closest to Colorado was the Western White Bronze Company in Des Moines, Iowa. I was quite surprised recently when I discovered a white bronze marker in Evans Cemetery in Greeley, Colorado. It was manufactured by the Detroit Bronze Company in Detroit, Michigan!
It would take a lot of time to get the finished product made and back to the salesman, who once again, had to make his deliveries. When faced with a lengthy travel time, hardships like winter and possible Indian encounters, white bronze headstones didn’t fare well in the west.
The popularity of white bronze in the Midwest lasted through the turn of the century and up until 1939. Metals were needed for use in World War I, and with that, the last and original foundry closed.
White Bronze markers are well made, beautiful and hold up to the elements. In conversations with others who share my interest, I’ve been told of stories from bootlegging days, when alcohol and other then banned items were said to be stashed behind panels and inside the hollow portions of the monuments. Who knows? Truth is stranger than fiction!

Are you on Facebook and want to know more about White Bronze markers? Check out http://www.facebook.com/groups/210120245693740/, White Bronze Headstones. We are a very friendly group who will answer all of your questions, and we post some wonderful pictures!
If not on Facebook, you can also visit www.saveagrave.net/white-bronze-headstones for more information. 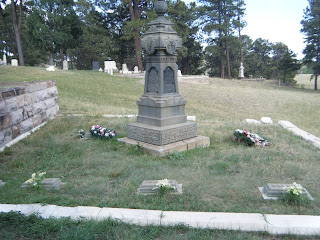 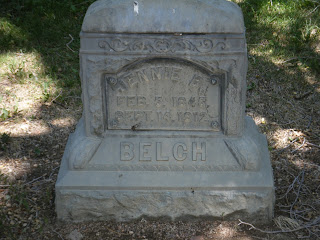 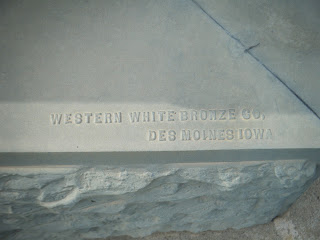 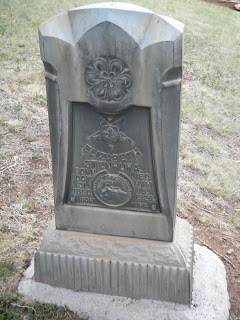 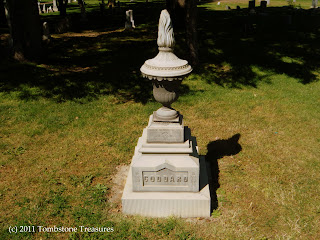 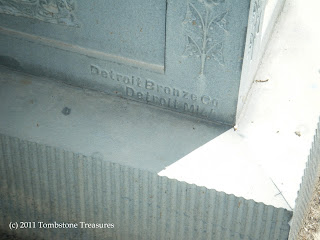 As you may recall in Part Two when my daughter Hannah and I found the Pitt Family burials, at first glance of the tombstones, the names and dates were barely legible as they were very old, worn and weathered.
Since it wasn’t going to be possible for us to go onto the property of  “Mr. P” to search for the “Reuben Long Family Cemetery”, I adopted the Pitt Family as my own.
My genealogical skills kicked in, and indeed, I found them!
I do have to make a correction however, what I read as the letter “O” (O.M. Pitt), was actually the letter “D”.
Here’s what I was able to find out:
David M. Pitt was born February 8, 1820, in Fleming County, Kentucky. He met and married Amanda Rhodes, September 12, 1842. She was born May 16, 1820, according to the 1860 U.S. Census.
Together they had 8 children:
Elisabeth Ellen Pitt, born June 25, 1843 in Kentucky.
Snowden M. Pitt, born February 11, 1846 in Kentucky.
**John W. Pitt, born July 14, 1848 in Kentucky, died October 20, 1858 in Kirksville, Adair County, Missouri.
David Pitt, born February 6, 1851 in Kentucky.
Sarah Amanda Pitt, born April 25, 1853 in Adair County, Missouri.
**Mary Virginia Pitt, born October 23, 1855 in Kirksville; died July 8, 1856 in Kirksville, Adair County, Missouri.
Sarah Belle Pitt, born in Adair County, Missouri.
Frances Pitt, born March 6, 1860 in Adair County, Missouri.
On the 80 acres once owned by the Pitt Family, my daughter and I found John and Mary.
The family moved to Kansas by 1880, and Amanda died November 7, 1895, and is buried in Richland Cemetery, Angola, Kansas. David remarried to a woman named Freedonia Brundolf, but died 2 years later. He is also buried in the Richland Cemetery.
John W. was 10 years old when he died, and Mary Virginia was only 9 months old when she died.
They are gone and forgotten for a time, but have been found and remembered again; this time, they won’t be forgotten!
© 2011 Patricia K. Long/Tombstone Treasures
Posted by Tombstone Treasures at 6:48 PM No comments:

As we departed from Wanda Riley and left the Filkin’s property, I should’ve been a bit sad & disappointed; I was anything but that! I was elated that I had come so far and met with such cordial folks that are still willing to keep in touch and also keep looking around their property for me. How many people would be willing to do that?


All in all, we surely did find tombstone treasures! 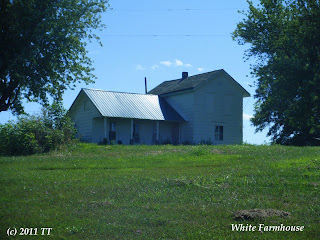 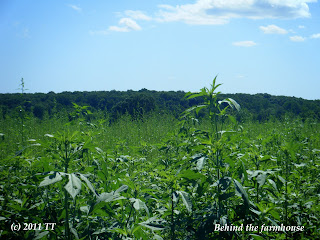 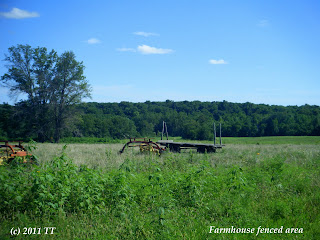 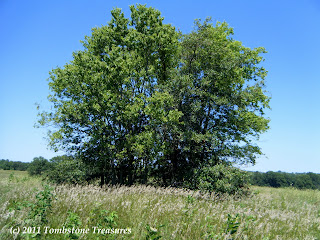 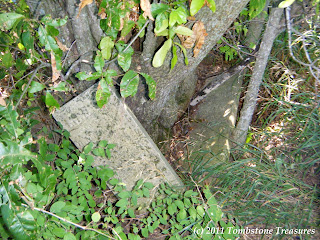 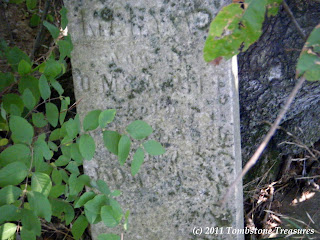 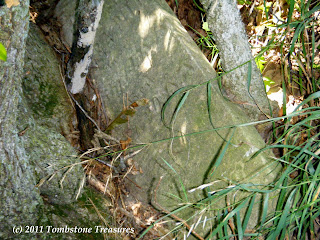 myself for things that would excite me, disappoint me, thrill me and frustrate me.  Little did I know that twenty-five years later I would
find more than I ever thought possible.
After saving $1500.00 since March of 2011, I finally had the time and money set aside to go back to Missouri, where my father was born and most of the Long family had lived. I asked my daughter and son, Hannah and Jesse, if they wanted to come too. Hannah will be taking over the family history adventures when I am no longer able, so I know all of my hard earned research won’t just sit on a shelf collecting dust in the corner of a family history center.
We started out on Saturday, August 6th in a nice 2011 Ford Fusion. A rental car was a must after all, we intended to do a lot of driving. Arriving about 1:30am in Macon, Missouri, I thought we did well driving the 700 plus miles straight through, only stopping for gas and the occasional bathroom break . We would have a day to recuperate from the long drive and get used to the 100 degree temperatures with extreme humidity.
Among the many cemeteries we were going to be visiting to take pictures of family headstones, which included going over into Quincy, Illinois, we were also going to be looking for two burial sites for the Long’s; in the Adair County Cemeteries book at the Adair County Historical Society, listed is two burial sites, both on private property. One was for my great grandmother, Elizabeth Jane Anderson Long and one of the daughters (Sarah or Emily), and the other was the Reuben Long Family Cemetery. Descriptions and directions to the cemeteries were from 1979:
“These burials are on John Filkins place about 8 miles northwest of Kirksville on B. According to
John Filkins, there is a lone cedar tree within 50 feet of the graves which are north of his home and west
in a pasture. Mussel shells mark the graves. At one time, site was enclosed by a rail fence. Information
furnished by Mrs. Cleve (Juanita Sevits) Adams.
Long, Mother and Child (girl) Both were killed when horses hitched to wagon ran away. Mr. Long later married Nancy Ledford Allen.”
“Location: This cemetery is located by going west from Brashear on J. As J curves north there is a road
that goes south to a farm house, about 1/8 of a mile. The cemetery is about a half mile beyond the
farmhouse, in a wooded area about ¼ acre in size. There are remnants of a fence and the graves are
overgrown. All of the stones found were down and most covered with dirt. It is believed that there are
slaves buried here also as Reuben Long owned slaves.
Long, Rebekah April 29, 1806 Feb. 1, 1861 or 81 - wife of Reuben
Long, Reuben Dec. 1865 aged 74 years
J.H.L.
M.F.L. & J.L.
Long, Judah Dec. 27, 1845 Oct. 17, 1853 daughter of Reuben & Rebecca
Long, Mary F. Dec. 10, 1836 Oct. 17, 1853 daughter of Reuben & Rebecca
Long, Reuben, Oct. 20, 1843 Oct. 19, 1853 son of Reuben
R.R.L.
Long, James H. June 27, 1834 Nov. 19, 1853”
I had made contact with Amanda Langendoerfer, the Head of Special Collections and Archives in the Pickler Memorial  Library at Truman State University. She was more than willing to try and find out who owned the properties now and make a first contact with them for me before we visited. She did make contact with the folks that own the Filkins property. John Filkins passed away in 2002, but the property is still owned by his daughter, Wanda Riley, and granddaughter, Jayne Sherman. I called Mrs. Sherman and we agreed to meet. I was excited beyond belief! What I had read in print was actually coming to life. To connect with your ancestors, the people you only heard stories about(if you were lucky!)was a dream come true for me.
We all met at the Filkins property and our exploration started the morning of August 13. I expected Mrs. Riley to point out the direction we should go, but to my surprise, the 81 year old came out into the field with us! I had never seen a cedar tree before, but Mrs. Riley showed me several and now it’s one I can identify easily. We wandered around the property in several areas where she thought the burial site might be….we found beautiful butterflies and a huge yellow and black spider, but no gravesite. There was so much green foliage still on the ground it was impossible to see mussel shells, if there were even any left to be found.
I had prepared myself for the likelihood that we wouldn’t find anything, after all, 153 years have passed….
Part Two coming soon! 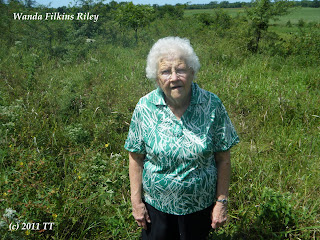 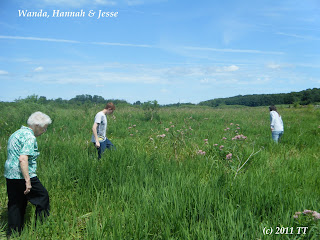 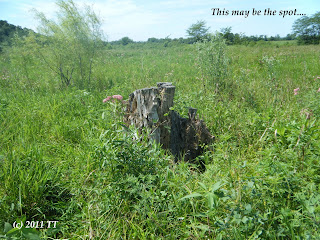 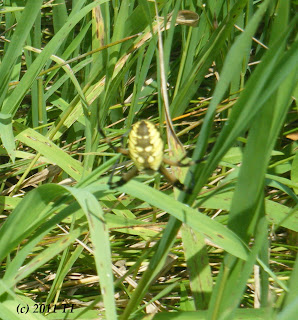 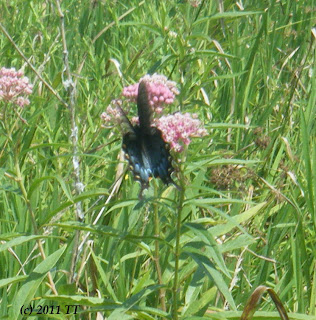 Posted by Tombstone Treasures at 11:15 PM No comments: 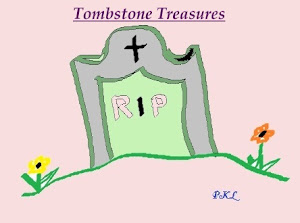 Tombstone Treasures
Well how much time do you have? I'm a native of Colorado Springs and became interested in history and cemetery preservation along with my genealogy research. After raising a family of five, I now have a bit of time to go and pursue my interests more often. I am a member of Find A Grave, the local Evergreen Cemetery Benevolent Society, Random Acts of Genealogical Kindness and part of the Gravesite Caregiver's Network. I intend to feed my curiousity and explore cemeteries until I no longer can....then the next generation can take over where I've left off...don't think for one minute I won't have a hand in the here after as well!! LOL!